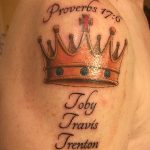 There’s a verse in the Old Testament book of Proverbs that has become on of my favorites. Proverbs 17:6 “Grandchildren are the crown of old men, and the glory of sons is their fathers.”

As a grandfather, I can testify that Solomon knew what he was talking about. Though had I thought about it much before becoming a grandfather I would have realized even then the truth of that verse.

Like everyone who has ever been born (with the exception of Adam and Eve), I had two grandfathers. Though I only ever knew one of them.

My paternal grandfather, William Raymond Romick, died seven-and-a-half years before I was born. He was born on June 3, 1896 in (I believe) Belmont County, Ohio. He died in September 1952, he was about 56. I can’t find documentation of his exact date of death.

I know very little about Grandpa Romick. He married my grandmother on April 12, 1919. Together they had 10 children, one of whom died shortly after childbirth. I would have said, “together they raised 10 children,” but from the few stories I’ve heard about him, I’m not confident of how much of a role in the raising he actually had.

He managed to survive the Great Depression and did work for the WPA for some time. And that’s about the extent of my knowledge of my dad’s father. (I have decided against sharing any of the details of the few stories I’ve heard about him, since most of them are highly unflattering.)

At the time of his death he had 4 grandchildren, two of them infants. I’m not sure how much of that verse in Proverbs actually applied to William Raymond Romick.

I have only seen a few photographs of Grandpa Romick. Two are shared here. One with him and Grandma and the other with him and my dad, Robert J. Romick. 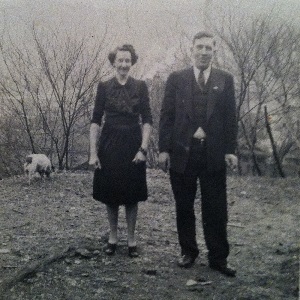 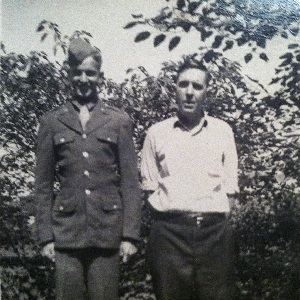 My maternal grandfather, George Benjamin Stirmel, is an entirely different story. As my only grandfather, he held and still holds a unique place in my life and heart. Though thanks to geography I didn’t get to see him very often.

He was born April 15, 1911 in Walworth County, Wisconsin. He died as the result of injuries sustained in a car crash on August 5, 1996, he was 85. He married my grandmother on December 1, 1931. They raised 6 kids, survived the Great Depression and all that came after.

For much of his life Grandpa was a farmer, though he did work in a metal shop and moved into town later in life. I remember many pleasant summer days spent on the farm when we take vacation trips half way across the country.

Mike and I would help feed the cows, pick vegetables from the garden and play in the barn. Grandpa taught me to shoot a gun, a 22 rifle in the backyard, shooting at an old barrel. One summer he took Mike and me on a ride in a one-horse cart. Something spooked the horse and he started running down the road. It took what seemed like an hour, but Grandpa finally got him back under control.

Grandpa Stirmel was a tremendous role model. He too survived the Great Depression, was a strong Christian, warm and loving. But he could be stern. I only saw him angry once or twice, but it was enough to let me know I didn’t want to see him that way often.

I share two pictures of Grandpa Stirmel here. The first is one of my favorites of him and Grandma. I’m not sure where or when the second was taken, but I suspect it may be in the kitchen of his house in town. 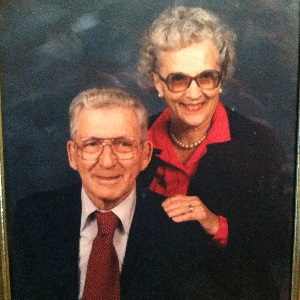 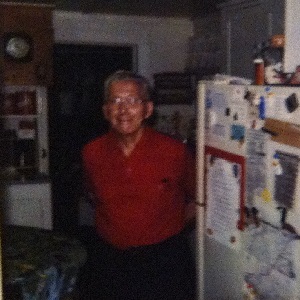