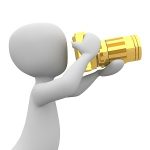 Thank the Lord for men like Thomas Wedgwood, Nicéphore Niépce, Louis Daguerre and William Henry Fox Talbot. They were instrumental in the invention, development and innovations that made photography possible. The first photographs took days to take and were often not very clear. Today nearly everyone has a camera with them at all times, built into their mobile device. We take a photo and within seconds we can share it with all the world.

This past summer, July 2017, I made a trip with Teri and two of our grandsons, Toby and Travis, to Martins Ferry, OH for a Romick family reunion. While there Mike (my brother) and I went through boxes of photographs that were stored in our parents’ basement. We divided them into four stacks, one for each of us, one for our sister Deborah, and one that would remain with Mom and Dad. We also took digital photos of many of them with our phones.

Some of those photos date back to the early years of the previous century. Each one holds some special memory. Though now, decades later, some of those memories are not so clearly remembered.

So I plan to share many of those photos and others here, hopefully on at least a weekly basis. I’ll also share as much of the memory as I can recall. If you can add any detail to the story behind those photos, please share it in the comments section.

To get started I’ve selected two photos and the image from the back of one them. 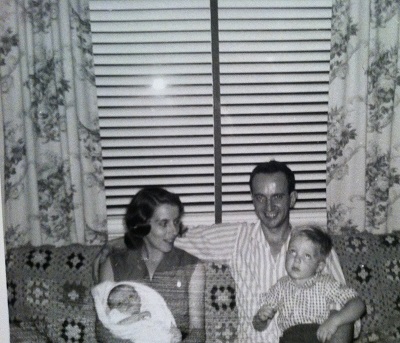 This first one is, as best as I can figure, from late 1960. I say this because that was the year of Mike’s birth and he’s the baby in this photo. That would make me around 2 ½-years-old. Mom, Alice, would be 27 and Dad, Bob, would be 35. My best guess as to where this photo was taken is the parsonage of Knoxville Baptist Church in Pittsburgh, PA. That was where we lived until late 1960 when we moved to Hopper Avenue in Fair Lawn, NJ, so there is a chance that the picture was taken in Jersey. 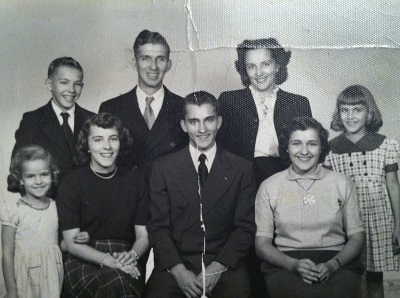 This photo is of the George Stirmel family in 1951 or 1952. That information was taken directly from the back of the photo. Grandma Stirmel, Virginia, was pretty good at documenting her photos, though as is evident from her uncertainty of the exact date, not even she documented these details right away. 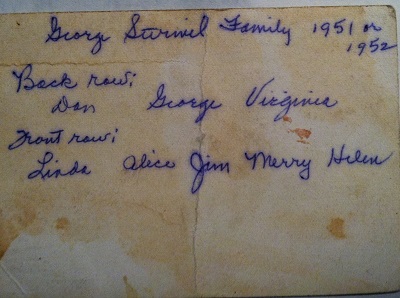 There is no internal clue as to where this family portrait was taken, except for the backdrop which makes me think it was done at a photographer’s studio. And since the Stirmels lived in the Delevan and Walworth, Wisconsin area, it’s a safe bet that the photographer was based somewhere in that vicinity.

I hope you enjoy this series. And please, if you can provide any more detail on any of the photographs posted here, please do so in the comment section or email me. And if you have any photos you’d like to share here, email me a copy with as much detail as you can provide.