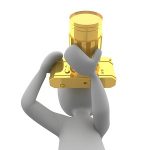 Grandparents hold a very special place in our families, especially in the Romick and Stirmel families. After our parents they’re the people we look to for acceptance, counsel and example. And they are at the core of some of our favorite family stories.

This week I share a picture of each of my two grandmothers, Pearl Romick, nee Crooks, and Virginia Stirmel, nee Brereton. I loved and still love and miss both of these amazing women. They both raised large families through the Great Depression, loved God, their husbands, children and grandchildren. And each lived into her 90s.

Geographically I was closer to my Grandma Romick and spent more time with her. Growing up in north New Jersey with Grandma Romick living in the same area, we saw each other quite often. When we lived in Cranford she attended church with us and would come back to our house almost every Sunday after church, along with Aunts Margaret and Dolores and often Uncle Johnny and once in a while Uncle Richard. She would often go on vacation with us and we spent quite a few evenings and did the occasional weekend sleep over at her house.

Then as an adult when Teri and Caleb and I moved to Long Island, NY, where Kelsey was born, we’d make the drive through the city and over to Jersey several times a month to have dinner with Grandma and Margaret.

We lived half a country away from Grandma Stirmel, and most of the Stirmel clan, so we didn’t see them nearly as often. We’d make the drive about every other year and spend a week or two enjoying the Wisconsin summer. I remember helping Grandma pick string beans from her garden. She showed me how to treat potato bugs, she’d usually drop a leaf over top of them and then squish them into the dirt with the heel of her boot.

I have fuzzy yet fond memories of driving with Grandma, Grandpa and a teen-aged Aunt Linda from Jersey to Wisconsin on my own at about the age of three. Mom, Dad and Michael would follow a week or so later. We stopped in Pennsylvania Dutch country to take in the Kutztown Folk Festival. That festival is still being held each year, 2018 will be its 69th.

I’m not sure of the exact dates of these photos. My guess is that the photo of Grandma Romick is in the early 1990s taken in the kitchen of Margaret’s home in Cranford, NJ.

I’m much less sure about the photo of Grandma Stirmel. Based on how old she looks, I’d venture that it was taken in the late 1980s to early 1990s, but that’s a guess at best. As to where it was taken, I don’t have a clue.

If anyone can provide any more detail about these pictures, please leave a comment below or shoot me an email or message me on Facebook.