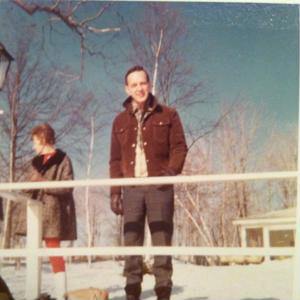 Technically snow is atmospheric water vapor frozen into ice crystals and falling in light white flakes. But in practice snow holds a kind of magic within each unique flake. Depending on where you happen to be, geographically and chronologically, that magic can be wondrous or almost evil.

I’ve lived in Georgia, south of Atlanta, since 1998. I can count on one hand the number of snowfalls we’ve had since then that actually produced any accumulation that lasted for longer than 12 hours. But those few snow events were major news. In January 2014 we were hit with Snowmageddon or Snowpocalypse. Less than 3 inches of snow crippled the city for days. All of the major Interstate highways running through and around Atlanta were shut down. Kids were stranded overnight at their schools since the buses couldn’t get out and parents couldn’t get in.

School systems regularly announce closings, early dismissals or late starts if so much as a flurry is forecast. Supermarkets sell out of milk, bread, bottled water and canned goods within hours of a winter storm forecast. Having grown up in north New Jersey and having lived, prior to moving to Georgia, in areas where less than 6 inches of snow was considered a dusting, I am still amazed at the reaction a flurry gets down here.

Today, Friday 12/08/17, we were hit by Winter Storm Benji. The Atlanta area was not the only region affected. Benji was forecast to hit most from Texas into the Northeast. Our area was forecast to have accumulations of 1 inch or so, though some parts of north central Georgia were forecast for as much as 3 inches. 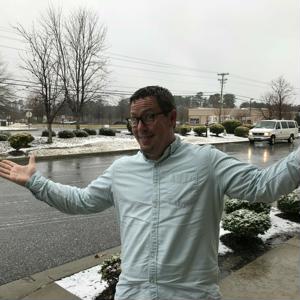 One of my co-workers is named Benji, and he took a sort of weird pride in this storm’s name. He is pictured to the right. Below is some video I shot during the day. (The photo at the top of this page is of my dad, standing somewhere in the snow, waiting for someone. I have no idea where or when this picture was taken. Check out the boots.)

Here are three pictures taken early during Snowmaggedon. The first one is from a local TV new channel of the Interstates turned to parking lots by the storm (and I use that term in the most liberal sense). The other two were taken in the parking lot at work. 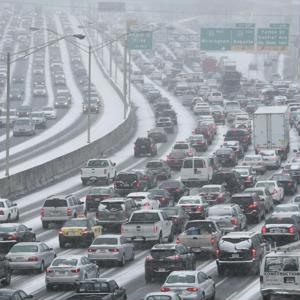 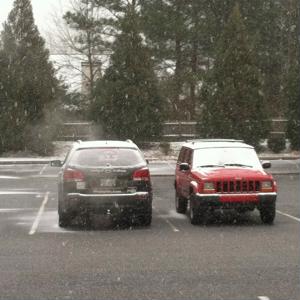 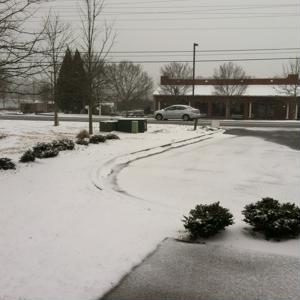